Board Structure – Part Two of Three 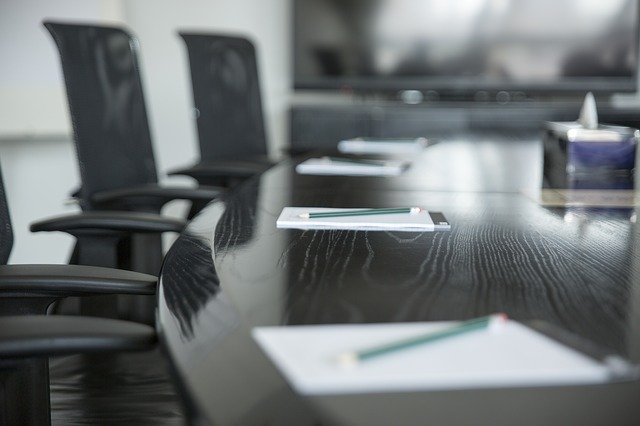 This three-part article addresses the first quadrant of Board Governance – that of Board Structure.

Board structure is a lens view on the physical; the things we can typically tick off on a compliance list of requirements. This is a foundation starting point in considering the effectiveness of a Board.

This, as with the other “quadrants” does not stand in isolation when determining, as we will do in these multi-part, four quadrat series, the effectiveness components identified in this governance model.

In Part One of Three on Structure, we discussed “Configuration” identified in the 11 C’s Model.

In this Part Two on Structure, we shall consider Genius’ addition to the 11 C’s, the 12th C – “Composition”.

In the Third Part on Structure, we shall address the many other Structural influences that we see impacting Board effectiveness and in the context of all Structure influences, how businesses approach being “Compliant”.

These are specific elements of structure that are considered in more detail, how the interrelationships of the structure components impact one another.

a. Number of Directors

It is typical for a Board or a Board Chairman to go for the lowest number of Directors possible, one is cost, and the other, often sub-conscious reason is that there will be less challenge and meetings easier to manage. This mindset is totally contrary to building an effective Board.

Assuming the UK Corporate Governance Code, 2018 as our guidance for best practice, and that there are the standard two Executive Directors, this would be the minimum requirement for a compliant Board structure.

Minimum Requirement to be compliant with the Code

The Code states in Provision 17 that “A majority of members of the committee should be independent non-executive directors” and then references that the Chairman of the board not to chair the committee when dealing with the appointment of the Chairman, therefore inferring that the independence test of Provision 11 which states that “At least half the board, excluding the chair, should be non-executive directors whom the board considers to be independent.”

To balance that not all Directors are on all Committees, the Chairman would need to be counted as an independent director which is not totally correct in counting the 3 independent NEDs per Committee.

The other value of the Committees having only some of the Directors is the focus those Directors can then offer and with that comes the visibility of those Directors to the organisation and its executive and senior management teams.

The shortfall in this model is that there is not a cross back from the Nominations Committee to the Remuneration Committee without unbalancing the loads on the iNEDs.

The CEO and CFO can be permanent or part-time attendees to certain committees based on the need of that Committee. A typical example being that the CFO would attend Audit Committee meetings.

There are also various management roles that are logical attendees to certain Committees, for example, the Human Resources executive to the Remuneration and the Nominations Committees and the Head of Risk to the Risk Committee.

Often a Board needs four or more Committees to deliver the work of the Board effectively, allowing the Board to remain strategic and to get the deep dives handled effectively.

– Non-independent NEDs – this a common for a Board, these could be family members, private equity or venture capital appointees, NEDs that are not classified as independent either due to duration of tenure or connectively to the organisation under the tests of Provision 10 of the Code.

Under these conditions, this is the minimum Board structure feasible to still be technically compliant.

In this example, the extra committee puts an extra load on all four of the iNEDs as the NED that is not independent is not counted towards the minimum requirement.

It is recommended that the SID does not chair a Committee which is not possible under a four Committee structure and four independent NEDs.

Therefore, to be more comfortable on workload, shared responsibilities, compliance and most importantly, effectiveness, under the above conditions of a non-independent NED and a fourth Committee; that the composition would be most effective if there were nine Board Directors.

A more effective Board Structure, where there is one non-independent NED

The Chairman can remain a member of the Nominations Committee if desired, but not recommended as the complement can be achieved without the Board Chairman.

The value in this model is that all five iNEDs have a specific role and the Chairman is the sounding board, mentor and independent input to the Chairman of the Committee empowering the right focus for each Committee. Therefore, offline the Chairman is very involved but does not use up time or create undue influence in the meeting.

In our experience, too many Boards find themselves behaving too operationally and this aspect of structure, composition and feedback is critical to strategic thinking, quality challenge and Board ownership of the key decisions and risks.

The SID, in this structure, can be an effective sounding board to the Chairman which provides depth to the effectiveness of the leadership and can positively ensure that the Chairman is effective.

b. Tenure of Directors

In terms of Principles 10 and 19, the Code defines the Director or Chairman cannot serve longer than nine years from date of first appointment.

Many Boards, following Guidance on Board Effectiveness, consider a Board Director to be at risk of no longer being independent beyond six years. This is due to them “having gone native” and no longer employing the degree of sharpness of assessment in challenge as have become familiar with the business and the people.

Therefore, from our experience as Board evaluators, where we have seen how easy it is for a Board to become complacent in good or calm times, we feel there is a need for more frequent refreshing of the Board.

Therefore, if there are four NEDs on the Board which is about the minimum to be effective, the following could be the kind of succession plan the Nominations Committee should consider. 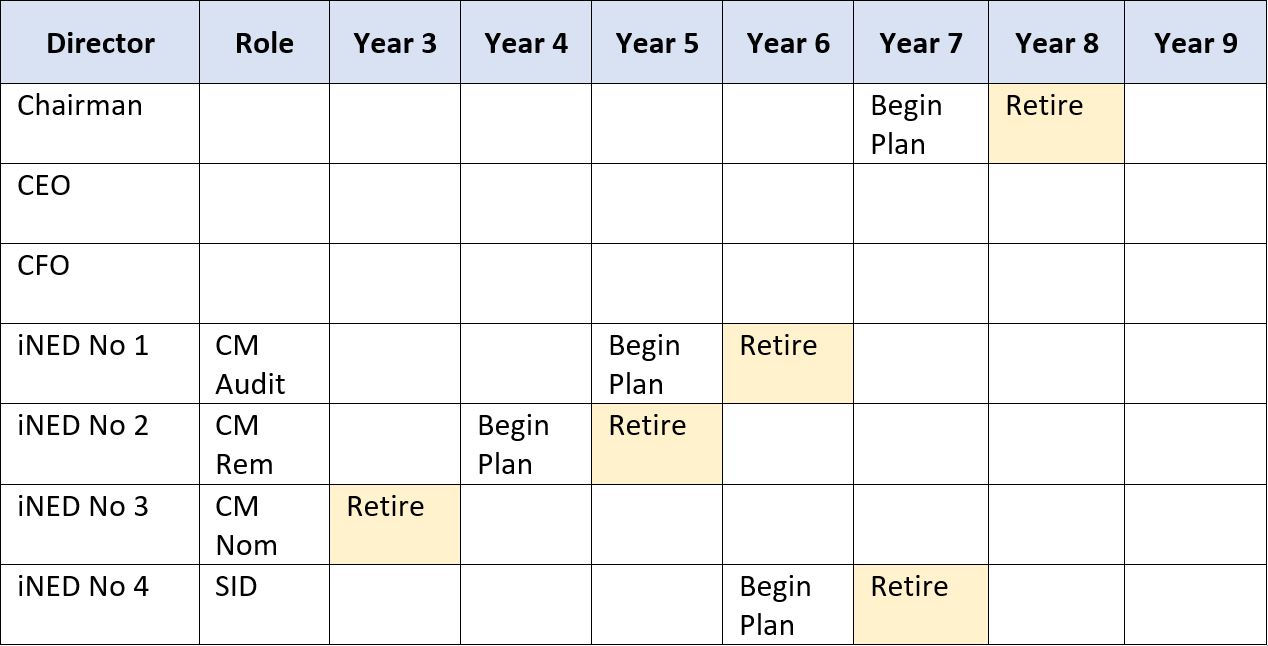 This is an example only, which does consider the Chairman and the SID being the longer-term Directors.

The organisation will then determine based on the people, the ability and the Board’s effectiveness which of the Directors should be considered for retirement in the three to six-year windows. It is not necessary that all should stay nine years, as experience shows that this depletes the effectiveness of conversation and reduces the ability for the Board to see impending risks.

Therefore, five Directors, with a tenure range from 3 to 8 years, allowing for ability to overrun as recruitment or other obstacles arise on appointing the right person, would result in an average tenure of 6.6 years on the board and allowing for a refresh of at least one person per year.

This will keep the board focused and effective with less risk of complacency building as the new Director will always bring a new perspective which helps the whole Board to review the issues with this additional lens.

It is natural to desire more of one’s own kind, to reduce tensions so that meetings are easy, but neither are conducive to developing an effective Board. A diverse Board is far more difficult to chair, does give rise to differing views but evidence shows it delivers better performance. (McKinsey study)

The area of diversity will be more fully covered under the Board Dynamics article, but to highlight the key diversities Boards should consider, we need to address those that are visible and most frequently considered but , in addition, importantly to consider the less visible diversities.

We know many of the visible ones – gender, ethnicity, age. The less visible ones would include – sexual orientation, religion or beliefs, background, education, attitudes etc

A key diversity to consider on a Board is the mixture of IQ and EQ – the technical intellectual capability of Directors but also having the balance of empathy, communication, listening, negotiation type of skills. Not often do you find the extreme of only the one or the other in a single Director but a greater or lesser blend, together with the Board complement having a balance such that challenge and debate works to deliver better decision making.

In this the second part of three, we have addressed the key “Composition” components of the Board. In the first part, we covered “Configuration” and in the next part on Structure, we shall address the many other “Structure” based influences on Boards and the concept of “Compliant”.